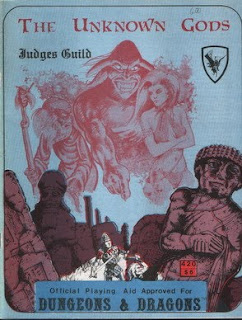 Well, I was going to only use three books in my next campaign, but that didn't take long to change once I remembered one of my old favourites - the Judges Guild supplement, Unknown Gods. This one goes back a bit, published in 1980, and is probably my favourite Judges Guild book. Forty-eight pages that I have used in almost every D&D campaign I have ever run.

What do you get for your money? Eighty-three gods, described in a similar manner as those in 'Gods, Demi-Gods and Heroes', or 'Deities and Demigods'. There is one critical difference that for many might be a deal-breaker, but for me is the big selling point - they are not arranged in any particular pantheon. There are no real clashes in terms of what the gods themselves represent - each one has its own rather small field - but no pecking order is given, and no idea of how the different gods interact with each other. Just a brief outline of the god, its statistics, powers, and appearance.

Y'see, I don't really like simply dumping the Norse, Sumerian, or Greek pantheon in my campaigns and calling it 'done'. I also don't really like putting together a complicated cosmology that will probably have little or no use in the actual play of my campaign; Unknown Gods gives me exactly what I do want. A large mix of gods, that can all be used in a single setting. None of them are parody, and all of them are immediately usable. Some of my favourites:

Sinakad - the God of Mercy for the Trapped
Bachontoi - the God of Red Wisdom (No, it doesn't go into what 'Red Wisdom' is...)
Margonne - the God of Evil Plans!
Vivistat - the God of Doom Unexplained
Lord Skortch - God of Pillage, Rapine and Thoughtless Acts

This book is crying out to be used in a sandbox campaign. Pick twelve or so of the more mainstream ones, and put their temples on the map, and you still have seventy-one left for strange and twisted cults, long-dead civilisations, small out-of-the way village chapels, wandering missionaries, and anything you will ever need. A great book, and it's heart is in the right place. Recommended.
Posted by Methuslah at 05:18